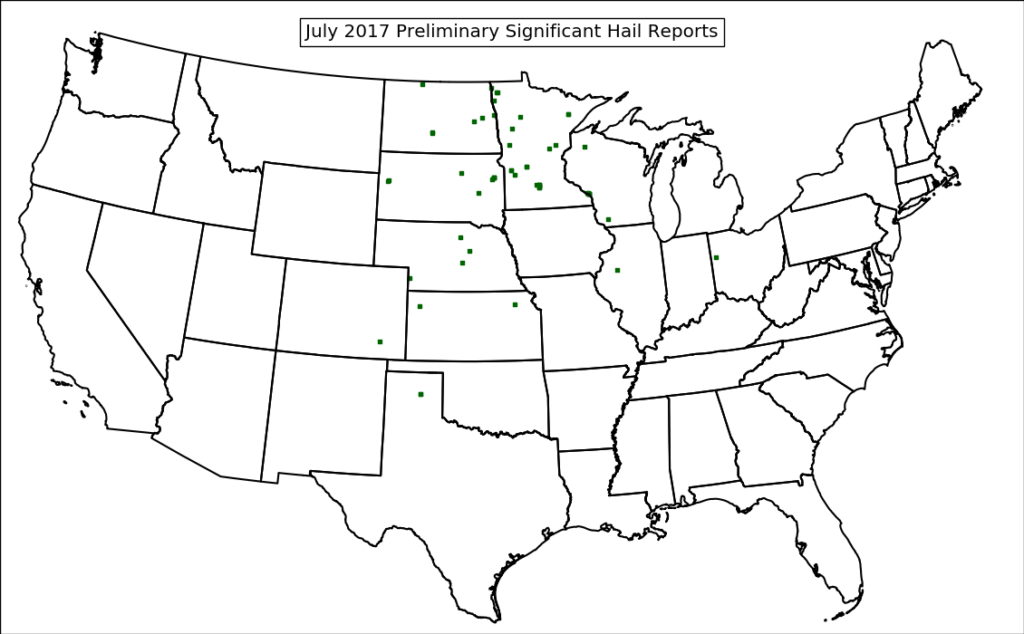 July was fairly active for significant hail in north-central U.S.  Concentrations were noted in the eastern Dakotas and Minnesota (near the Red River Valley area), with more sparse concentrations across a broader portion of the U.S.

How did the model fare?

7-month significant hail forecasts depicted a couple of regions of higher concentrations of severe hail – one in eastern North Dakota and western Minnesota (centered around the Grand Forks region) and another centered around southwestern South Dakota, western Nebraska and western Kansas. The eastern area appears to be an accurate forecast – that region experienced multiple bouts of significant hail activity (7/4, 7/12, 7/21, and 7/31).

Upon initial glance, it appears that the western area (South Dakota and Nebraska) didn’t fare as well as eastern areas did.  However, an examination of August significant hail reports indicates concentrations that strongly resemble that of July’s forecast for this area.

This type of forecast timing discrepancy has been observed in previous experimental runs – particularly for clusters of tornado activity. While it isn’t particularly a surprise given the timeframe of the forecast being discussed (7 months), temporal disaggregation of the risk presented here will be a point of focus for model improvements in the coming months. The goal is to pinpoint 1-2 week timeframes for increased severe weather potential, which might increase applicability of the model toward public safety efforts. Some of these efforts are already underway.

Loss probability curves (below) also indicate the increased potential for hail losses in these regions.

Catastrophe model results in the general area of western South Dakota and western Nebraska.  Loss probabilities include forecasts of both hail and significant hail reports in the region during July 2017.

Catastrophe model results in the general area of eastern North Dakota and western Minnesota.  Loss probabilities include forecasts of both hail and significant hail reports in the region during July 2017.

As stated in a previous post, the catastrophe model used to generate these loss probabilities are developed for single-family residences and will not resolve monetary losses to automobiles and other structures.

The next couple of posts will discuss model tornado forecasts at extended lead times.

SBIR Outcomes, Early Warning for TC landfalls, and May 2019 tornadoes