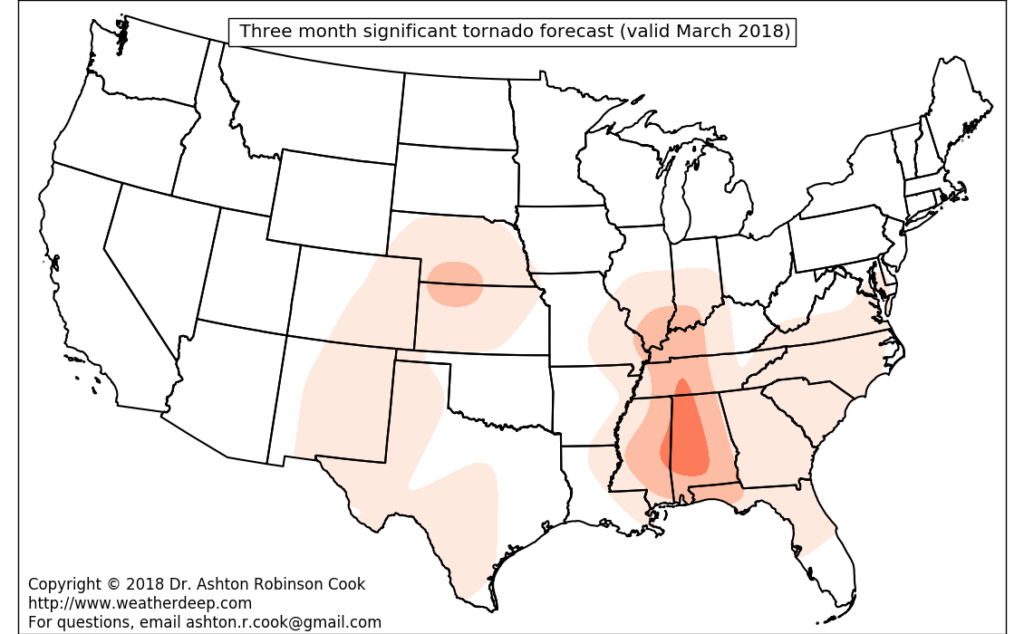 A series of tornadoes moved through northern and central Alabama on March 19, with the most notable of these storms directly impacting the Jacksonville, AL community and Jacksonville State University. Not only did three-month significant tornado forecasts highlight the potential for this activity to occur, but a new 15-day forecast model I’ve recently created also highlighted this potential.

Significant tornadoes were forecast with three-months of lead time…

The WeatherDeep L-model for Extended-range Severe Storm Prediction (described hereand hereafter referred to as the “L-model”) suggested that Alabama would experience a heightened significant tornado risk in March 2018 with about three months of lead time (see figure below).

In addition to the “L-model”, I’ve been working hard to develop a 15-day forecast tool for tornado, hail, and wind prediction. Although this development is currently experimental, it also indicated an area of heightened significant tornado risk in Mississippi and Alabama between March 9 and March 24, with lower probabilities also noted in portions of Arkansas, Oklahoma, northern Texas, and Iowa. Additional, subsequent runs of the model (not shown) indicated that the highest severe weather probabilities in the U.S. during this period were concentrated in Mississippi and Alabama, potentially providing 4-10 days of lead time in advance of tornadoes affecting northern and central Alabama on March 19.

Discriminating between active vs. inactive tornado periods… and a note on the tropics