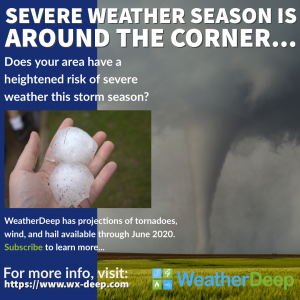 WeatherDeep is now utilizing its ground-breaking technology to provide forecasts for the upcoming spring 2020 severe weather season!  Find out if your area will experience a heightened risk of tornadoes, hail, or damaging wind gusts.  Read below for example forecasts from 2019.  Reach out for a free consultation…

Protecting Your Business Against Severe Weather

In business, issues arise that can cost you and your company or organization time and resources. There is nothing that can do more damage to your business though, both literally and figuratively, than severe weather.

If you are like many companies or organizations, a severe weather event such as a tornado, hurricane, large hail storm, or damaging winds can wreak havoc on your business and cost you tens of thousands, if not millions, of dollars.

So, how can you minimize the damage that severe weather can do to your business? Would extra lead time and an earlier “heads-up” help you be better prepared for the worst? If your business or organization is at risk of suffering because of severe weather, you need to subscribe to WeatherDeep.

WeatherDeep is a weather and software development firm that has developed groundbreaking technology to identify and forecast extreme weather much further into the future than traditional forecasts. It does this by using machine learning and Artificial Intelligence (AI).

The site currently offers projections of dangerous weather conditions several months in advance of its occurrence. As of February 2020, WeatherDeep has forecasts for tornadoes, wind, and hail available as far out as June 2020. WeatherDeep’s models can highlight regions of the country that will experience above-normal, near-normal, or below normal severe weather activity in a given timeframe.

This system has successfully predicted past severe weather performance and gave users incredibly valuable foreknowledge of situations such as the active May 2019 tornado season 1-2 months in advance.

The 2019 U.S. tornado season is the perfect example of how WeatherDeep works and why it is so valuable to first responders, government and military officials, and businesses in areas prone to extreme weather.

As you can see in Figure 1 below, WeatherDeep projected the areas of the country that would experience departures from the average regarding tornadoes from February – April of 2019. The WeatherDeep sample forecast below shows that much of the U.S. Southeast was projected to experience “Above Average” tornado activity during this time.

This projection turned out to be accurate as early March 2019 saw a string of deadly tornadoes ravage parts of Alabama and Georgia. These tornadoes resulted in multiple casualties and cost businesses in the region millions of dollars. 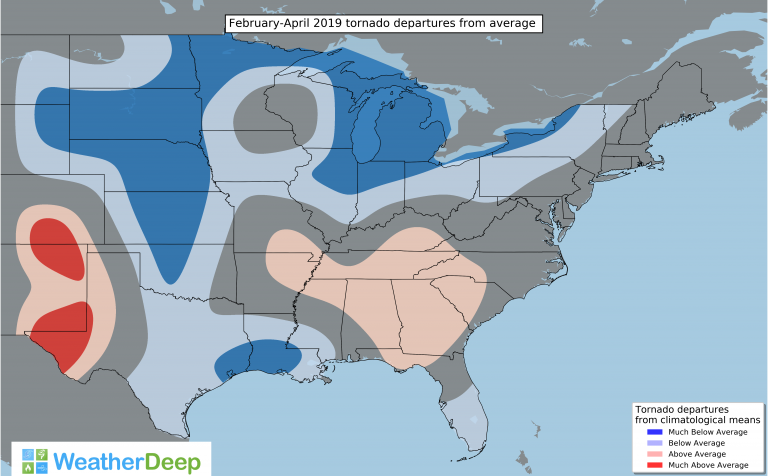 Figure 1: Example seasonal forecast of February-April 2019 tornado activity and expected departures from average.  Much of the southeastern U.S. was projected to experience above-average tornado activity ahead of tornadoes occurring from Missouri and Arkansas eastward to Alabama and Georgia

Later in the 2019 tornado season, WeatherDeep predicted which areas of the country were most at risk for tornadoes.  In Figure 2, the predictive tools at WeatherDeep showed that May – July of 2019 would see “Much Above Average” tornado activity in the central, “Tornado Alley” section of the country. And, as predicted, May 2019 set records for the number of tornadoes in this area. More than 220 tornadoes touched down in these Midwestern states in just 13 days from May 17 – 30. 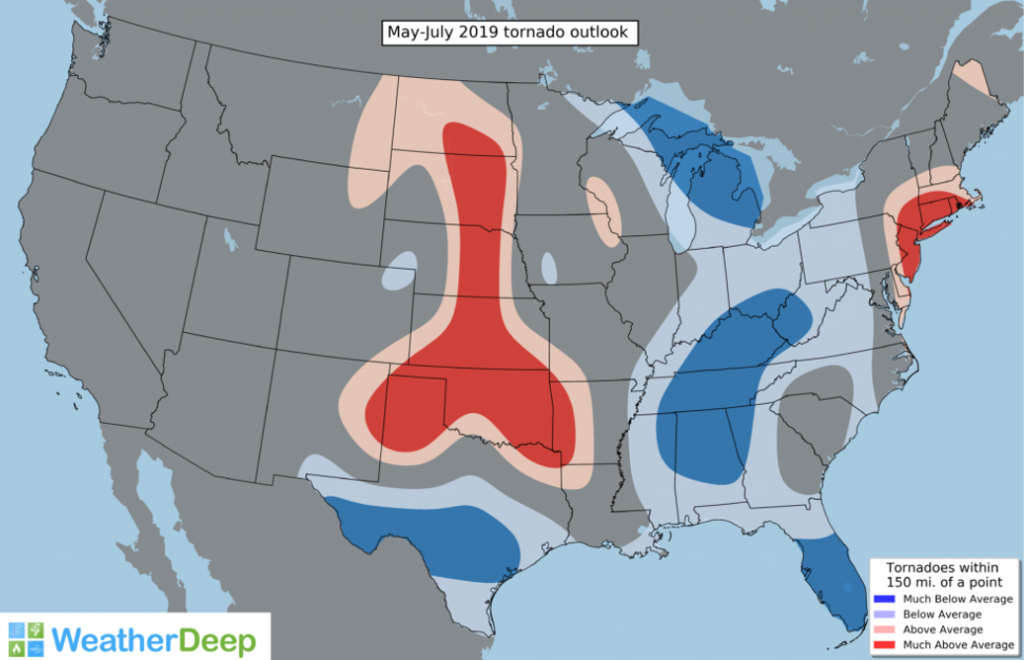 How does WeatherDeep predict this kind of severe weather with such accuracy so far out? It does it by utilizing AI technology and machine learning. In 2020, meteorologists and climate experts are just scratching the surface of what AI can do in terms of forecasting. However, the early results, like the ones demonstrated by WeatherDeep, are incredibly promising.

The way weather forecasting currently works requires forecasters to analyze massive data sets gathered from sensors and weather satellites across the world.  They then must identify patterns in this data to predict future weather. Because of the limitations of humans and previous technologies, what ends up happening is little more than an educated guess.

With AI and machine learning, the capabilities to analyze data in real-time and produce much more accurate models are much greater. This technology can also take many more factors into account than previous technologies to make forecasts all the more accurate.

How We Benefit from AI-based Severe Weather Predictions

All this new information and increased accuracy allow organizations and businesses to benefit in numerous ways. The longer lead times provided by these forecasts offer an expanded decision space for businesses and other entities expected to be impacted.  This can mean many things such as moving high-value pieces of equipment, changing workflow or schedules, and evacuating personnel out of potentially dangerous areas in plenty of time to avoid catastrophe.

It can also help governmental organizations, planners, and first responders. When these groups have more lead time to consider a potential disaster scenario, they will be much better able to deal with it when it comes. This is something that will be good for society as well as businesses in the area and the local and national economy.

Using the example of Hurricane Michael, which devastated the Florida panhandle in October of 2018, WeatherDeep analyzed what early detection could have done for the region. With the potential for 40-45 days of additional lead-time that WeatherDeep would have been able to provide, there would have been the potential for between $85 million and $3.5 billion in cost savings. This is exactly the kind of economic impact being prepared well in advance can have.

In 2020, weather, and especially severe weather is changing and seemingly increasing all the time. It causes massive damage to regions and has far-flung implications on businesses and economies across the United States. Luckily, as extreme weather increases, so do the capabilities to better predict this type of weather. That is where WeatherDeep comes in. If you live in a region and are a member of a business or organization that is vulnerable to severe weather, you need to know as far in advance as possible when and where this dangerous weather is coming. Check out wx-deep.com today to learn more about how this technology works, its benefits and how you can use it to help your organization and your bottom line.