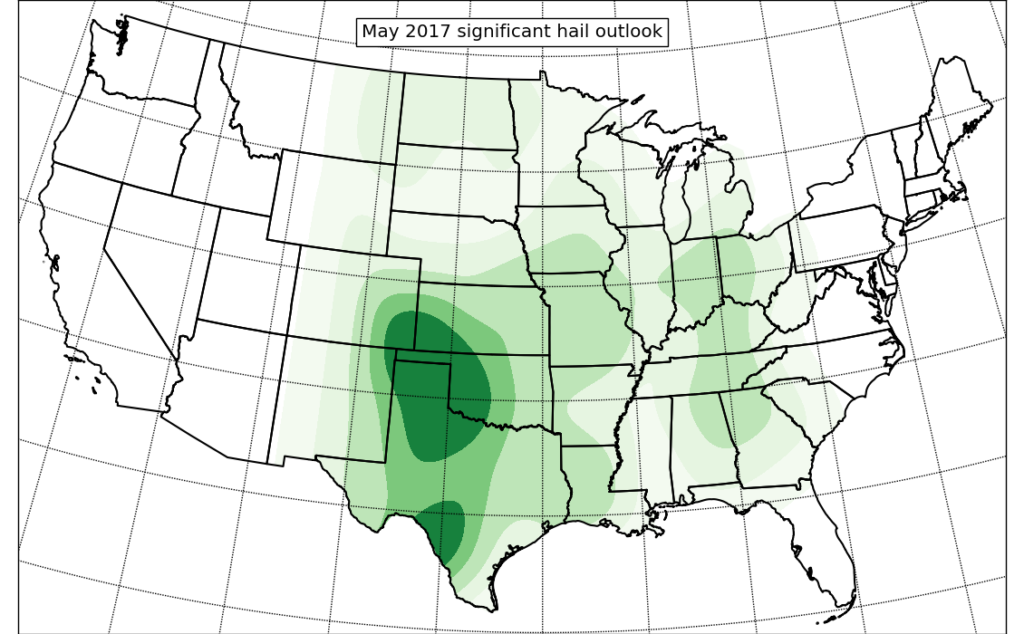 On May 8, 2017, Denver, Colorado experienced its costliest hail storm in history, with insured losses totaling roughly $1.4 billion (Source: https://www.denverpost.com/2017/05/23/hailstorm-costliest-ever-metro-denver/). The hail, ranging from 1-2.75 inches in diameter, was spawned by a severe thunderstorm that moved northeastward across western sides of the Denver Metro area during the afternoon.

How far in advance could the Denver hail storm have been predicted?

Five-month outlooks (valid May 2017) depicted a broad area of heightened potential for significant hail activity extending from eastern Colorado into western Oklahoma, with some potential for occurrence (albeit lower coverage) farther northwest in the Denver area. Even though the model is not intended to provide forecasts for hail events in individual cities, it performed well at highlighting the areas of greatest significant hail concentrations – especially in the center of the country. Also worth noting – the concentrations of hail depicted by the model in Colorado were higher than what would normally be expected based on climatological averages.

Although predicting the individual hail storm that hit Denver several months in advance would’ve been extremely difficult, application of the model-generated forecast to a simplified catastrophe model (as performed below) can provide some interesting insights regarding the hail risk in central and eastern Colorado.  These results indicate that an event like what happened in Denver was more likely to occur in May 2017 than climatology would suggest.

Catastrophe model results in the general area of central and eastern Colorado.  Loss probabilities include forecasts of both hail and significant hail reports in the region during May 2017.

It should be noted that the above catastrophe model results are geared mainly toward single family residences and will not resolve monetary losses to automobiles and other structures.  Nevertheless, nearly every catastrophe model scenario depicted above-normal hail loss potential in the region for May 2017.  An underwriter armed with this information may have a different perspective on his/her profitability while managing risk in Colorado, ultimately affecting their company’s bottom line.

In the next post, we’ll discuss even longer lead-time forecasts of tornado events that occurred in spring and summer.

Discriminating between active vs. inactive tornado periods… and a note on the tropics

30+ days of leadtime for Fay! Will August be active???

SBIR Outcomes, Early Warning for TC landfalls, and May 2019 tornadoes